Naka Kirei Enzyme supplements’ been gaining popularity in many countries. Yet, we were quite surprised to find it rated only two out of seven stars on @cosme reviews! This came to us as a surprise, to be honest. And as part of our duty at Wonect, we decided to dive into each of the reviews to find out why the Naka Kirei Enzyme received such a rating overall! 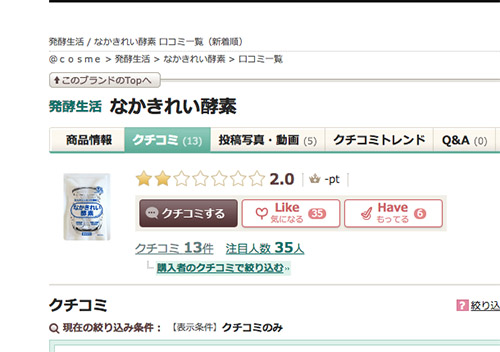 Two out of seven stars on @cosme? It’s time to investigate the discrepancy!

First, what is Naka Kirei Enzyme?

Most of you who follow us already know the popular @cosme review site, and why we often turn to it for reviews. Instead, let’s relook at what kind of product Naka Kirei Enzyme is.

This supplement aims to improve the health of our body by helping us to keep our weight in check and detox our internal system. So we can expect this item to support us in our dieting plans, and even help with constipation concerns. Naka Kirei Enzyme is of course made in Japan, brought to us by Hakko Seikatsu Co Ltd, a Tokyo-based company.

We had doubts about the ratings at first glance. This is because so far there has been only 13 reviews on the @cosme. 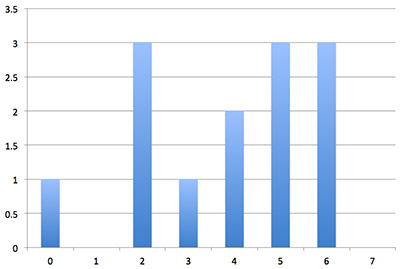 Number of reviews of each rating (X/7 stars). Doesn’t seem so bad now!

This is where we need to dive deeper to understand what the reviews say, so let’s do that now! 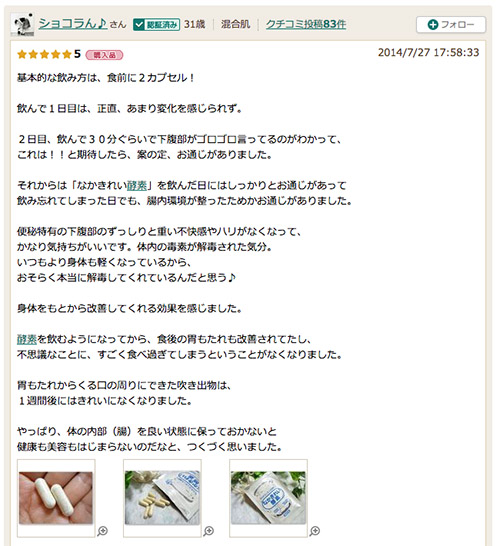 To be honest, there won’t be any changes on the first day you take these supplements.

30 minutes after I have taken them in the second day, my lower tummy started to growl. “This is it!!” I thought, and I my constipation was gone as expected.

I took to taking “Naka Kirei Enzyme” everyday from that day onwards. Even though there are days when I had forgotten to take the supplement, my intestines were still in good shape and there were constipations.

I had lost that heavy feeling that came with constipations, and it feels good. It’s as though my insides have been detoxed. Furthermore, my body feels lighter than before. Surely it has something to do with the detox ♪

I feel that my body has improved from the core.

Ever since I started taking enzyme supplements, my after-meal stomach and fatigue showed signs of improvement. The mysterious thing is that I no longer have the feeling of overeating.

In fact, not only my after-meal stomach and fatigue, but I no longer have pimples around my mouth after 1 week.

It has made me believe in how poor maintenance of the insides (intestines) could lead to poor health and beauty.” 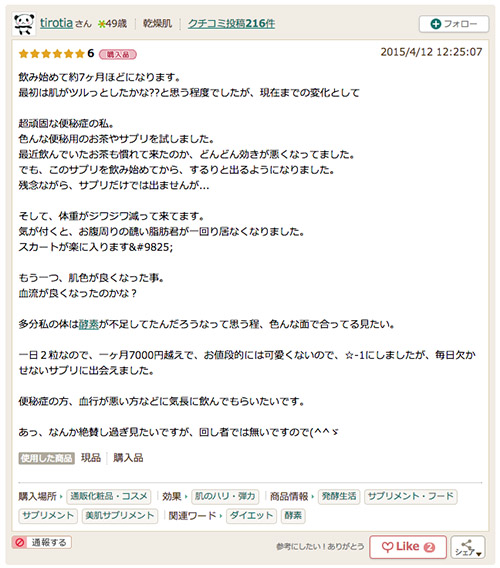 “It’s been about seven months since I started taking the supplements.

At first, it was the feeling of “Has my complexion improved?” But now, the change for me is…

… the stubborn constipation of mine. I have tried various anti-constipation tea and supplements. Recently I had gotten use to one of the teas I’m having, but its effectiveness has been dropping. However, ever since I started taking this supplement, it has been smooth for me. Unfortunately, the supplement isn’t enough by itself…

And so, gradually my begun to lose weight. By the time I realised it, the ugly fat around my belly had disappeared. I was able to fit into my skirts easily~

One more thing: my skin colour had improved. I wonder if it’s because my blood circulation has improved?

It has led me to think my body might not have enough enzymes, so I’d like to try approaching this from a number of directions.

It can cost 7,000 yen per month because it’s two tablets a day. It’s not a cute price, so I gave it a -1 star. I have met the supplement I cannot do without daily.

I keenly recommend this supplement to anyone with constipation or have poor blood circulation.

Oh, it seems I have been over-singing its praises. I am not related to the product in any way. (^^ゞ”

What kind research would this be if we didn’t look at why users wouldn’t like it? Let’s look at the first Naka Kirei review, which gave a zero…! 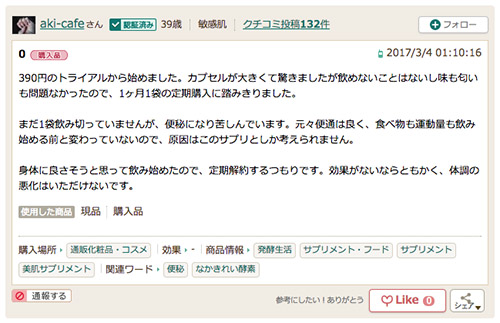 “I started with the 390 yen sample. Although I was shocked by how big the capsule was, it wasn’t something I had never tried before and that was no smell to it. So I decided to order it monthly with one packet a month.

Before I was finished with the first packet, I started to have constipation issues. I originally had no issues with constipation, and had not changed my diet nor sporting activities after taking the supplements. Thus the cause has got to be the supplement.

I started to take the supplement because I thought it’s good for the body, but I have decided to end my monthly order. Even if the supplement isn’t effective, it shouldn’t lead my body condition to worsen.” 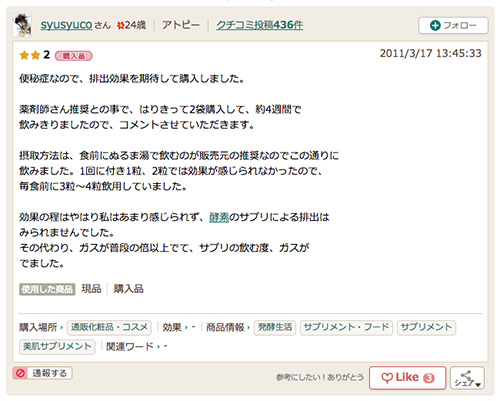 Under the recommendation of the pharmacist, I enthusiastically bought two packets for about four weeks consumption. It was 1 capsule per taking, and 2 capsules didn’t bring about enough changes. Thus I went with 3~4 capsules everyday before meal time.

I couldn’t feel there was any benefit. Neither could I see what enzyme supplements has expelled from my body. Instead, everytime I took the supplements, I started to have gas.” 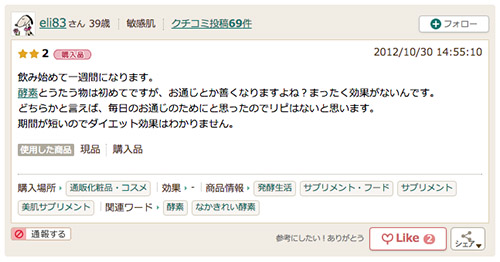 “It has been a week since I started to take the supplements.

It’s my first time trying enzyme supplements, though the lack of results has made me wonder if my constipation has even improved. If I have to say, I will not be buying this again because I want to be constipation-free everyday.

I am unsure how this affects dieting since I have taking for only a short period of time.”

At the end, @cosme is only one source for reviews

Yes, @cosme is trustworthy, but only if we have enough people giving reviews. How many is enough? Well, this writer thinks 13 is still a shortfall, considering how we are all different and have different needs. So I don’t think 13 is a representative number. However, Naka Kirei Enzyme does seems to deserve more than a two out of seven.

Furthermore, age and skin type didn’t seem to play a part in effectiveness. We also need to be aware of some “rules” about taking enzyme products. For example, enzymes should not be taken with hot drinks, and we need to take other nutrients as it is not a replacement. In fact, if you believe, you may want to continue for 1~3 months, because our bodies can take up to 90 days to replace cells. (However, it does not mean you need to stick to Naka Kirei Enzyme.)

It’s probably best that we do more research, especially with references and have used Naka Kirei Enzyme before. We also plan to do a review this product in a future episode on our YouTube channel, so consider subscribing so as not to miss it!